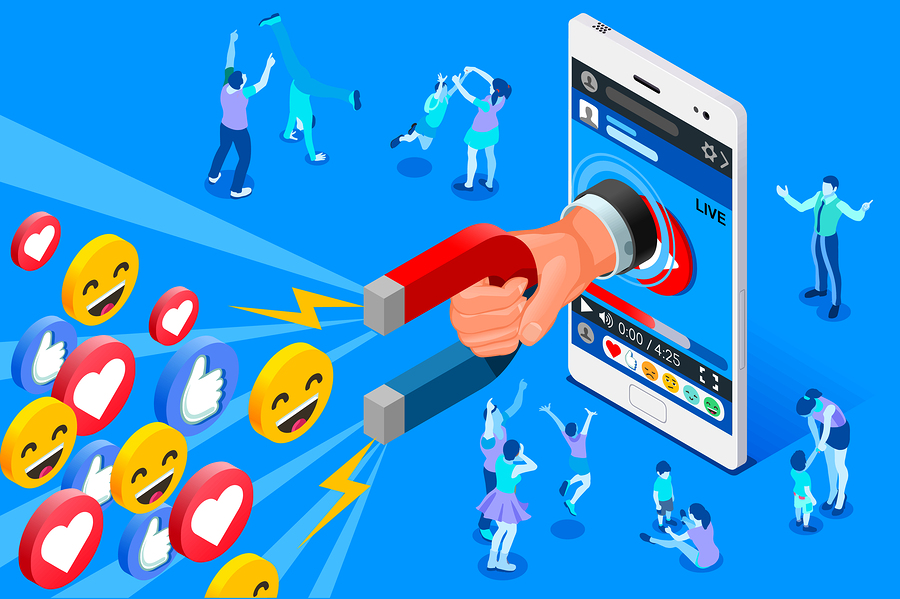 With the omnipresence of social media in our 21st century lives, influencers have come to play a pivotal role in the marketing industry. And while there’s no shortage of them, it can sometimes be difficult to find influencers who align with your brand and its campaign objectives.

This can be especially challenging for small and medium-sized businesses who run their campaigns in-house. In fact, according to a study, 34% of brands who run their own campaigns said that the most difficult aspect was finding influencers in the first place.

This problem may arise from the fact that some people simply don’t know what to look for when searching for influencers. So let’s take a look at the metrics you need to analyze when finding influencers.

Follower count is the metric that first comes to mind for most people when thinking of influencers. And while follower count is definitely important, it’s not necessarily the most important.

Follower count is important in that it determines an influencer’s reach, or the amount of people they can possibly reach with their content. Hand in hand with this, it also determines their price; the more followers an influencer has, the more expensive they are to hire.

But, when a large number of followers includes a high percentage of fake or disengaged followers, that’s not great for your brand’s marketing efforts.

In addition to the number of followers, you should always check how an influencer attracted their followers. If you see slow and steady growth, it suggests that the influencer won over their followers with quality content and commitment to their profile. 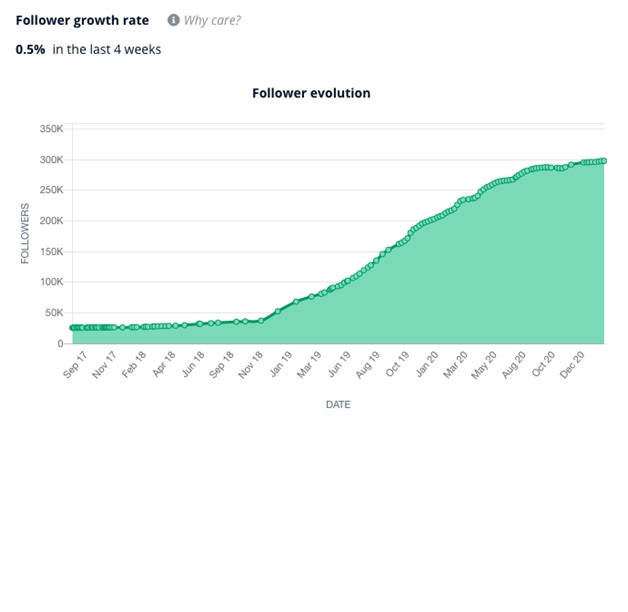 This growth is steady over time, which suggests that it is organic. Source: Heepsy.

However, if you see a sudden, drastic burst of growth, you need to investigate further. Look to see if there’s a logical explanation, like a giveaway or viral moment, for that influencer to attract lots of new followers. And if you can’t find one, beware: that growth might be a sign of fake followers.

A tactic that some influencers use to gain followers is the follow/unfollow method. If you use social media, it may have happened to you at some point. The influencer follows you, waits for you to follow back, and then later on, unfollows you. You can see if an influencer may be using this tactic by looking at the ratio of followers/following.

Now, unlike fake followers, these new followers are real people. But they didn’t seek out and follow the influencer because of the content on their page. Instead, they were simply trying to be polite. And while they may help boost follower count, most of them probably won’t help engagement rate, which brings us to our next metric.

Engagement rate is one of the star metrics when it comes to influencer marketing, because it shows the level of connection between an influencer and their followers. And when followers are more engaged with an influencer’s content. That means they’re more likely to be engaged with the brands that the influencer promotes.

You can calculate engagement of a post by adding up the total interactions on a post, dividing that total by the number of followers, and then multiplying by 100. Then, do this on a few posts to take the average.

Additionally, it’s important to recognize that engagement rate varies by social network, and by the number of followers that an influencer has. So it’s unfair to compare, for example, Instagram influencers with 50K followers to Youtube influencers with 100K subscribers. Therefore, know the industry averages, or use an influencer marketing platform, which will automatically analyze the data for you. 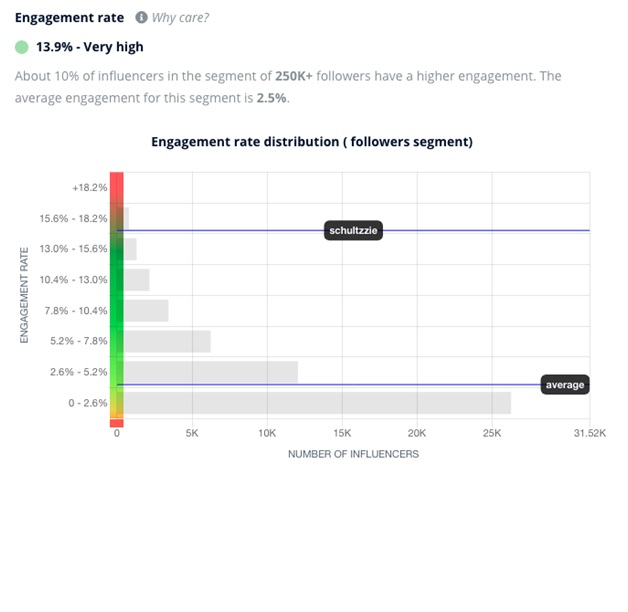 This influencer’s engagement is very high when compared to her peers. Source: Heepsy.

When you run any marketing campaign, you have to define your target audience. Who are you trying to reach with your campaign content? Influencers can help you reach those people, but you need to vet their audience before choosing which influencer is right for your campaign. Look at demographics like interests, language, location, age and gender. Does the influencer’s audience match your target when it comes to these demographics? 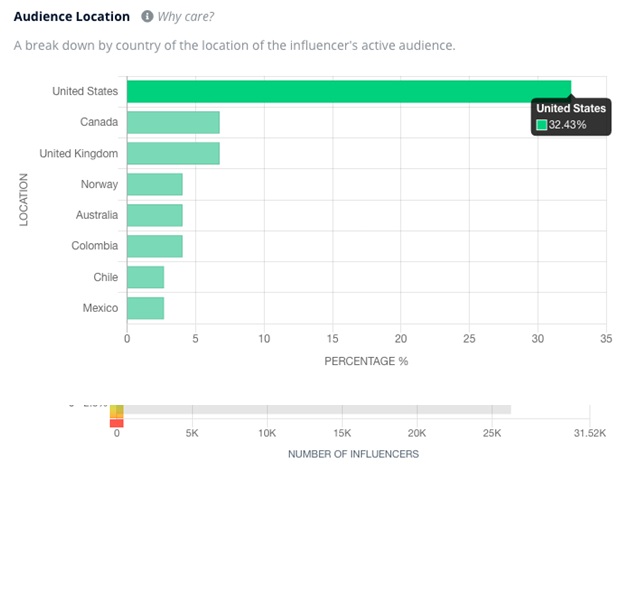 We can see in the chart that only 33% of this American influencer’s audience actually comes from the US. Source: Heepsy.

While it’s natural to expect that an influencer will have some things in common with their audience, we can’t assume that’s always true. It’s always better to double check.

Remember above when we mentioned fake followers? Well, these fake followers are generally bots. Analyzing the authenticity of an influencer’s audience makes sure you don’t end up wasting your money and effort marketing to computer programs. 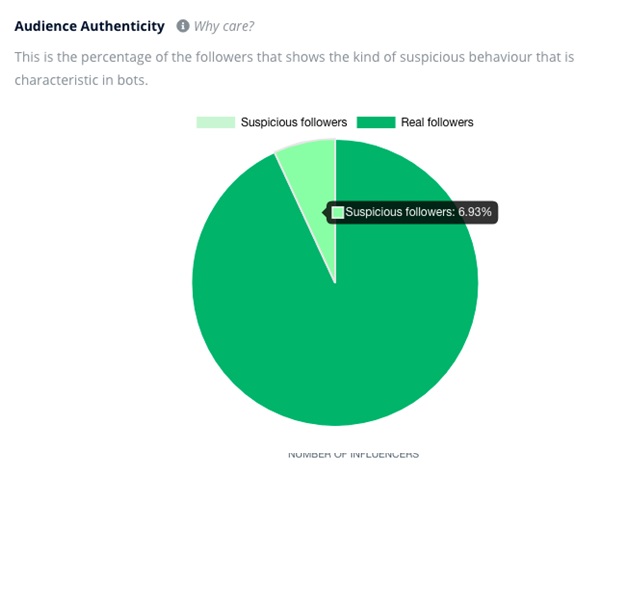 An audience authenticity analysis, showing that around 7% of this influencer’s followers look suspicious. Source: Heepsy.

So, how can you do this? If you’re using influencer marketing software, this metric appears as part of the analytics. If not, you’ll have to do a little searching directly on social media to see if followers appear to be humans or bits of code.

Finding the right influencers may be a challenge, but it can be made easier by knowing what metrics to analyze during your discovery process.